DataLibraryResearch is tracking the market dynamics of the crisis in the Service & Software industry amid lock-down changes in the supply chain.

The global LTE IoT market is developing because of the growing number of connected devices and the necessity for distinct and well-defined network parameters. Because manufacturing operations are so delicate, companies are turning to IoT wireless connection platforms, sensors, and IoT solutions to increase productivity and transform their operations into smart manufacturing. Many software and solution vendors are offering smart manufacturing solutions that include automated and proactive analytics, changing industrial production into an intelligent and self-managing ecosystem. This factor is expected to drive the global LTE IoT market in the coming years.

LTE IoT is a relatively new technology that is predicted to grow rapidly in the future years. The Internet of Things (IoT) is rapidly evolving, resulting in a strong need for data transit and storage applications. Several industries, including IoT-enabled manufacturing, professional services, telematics, navigation, and infotainment in transportation, are likely to boost the global LTE IoT market's rapid growth. The emergence of linked devices is propelling the LTE IoT market to a considerable extent all around the world.

Like many other industries, COVID-19 badly knocked the electronic and semiconductor industries. This unprecedented event has impacted nearly 230 countries in just a few weeks, resulting in the forced shutdown of manufacturing and transportation activities within and across the countries. This has directly affected the overall sector's growth. It is estimated that COVID-19 to leave more than USD 30 billion impacts on the electronics and semiconductor industry. The sector is majorly affected due to transport restrictions on major electronics and semiconductor raw material providers. However, the emerging need for semiconductors in several industries will offer rapid market recovery over the future period. 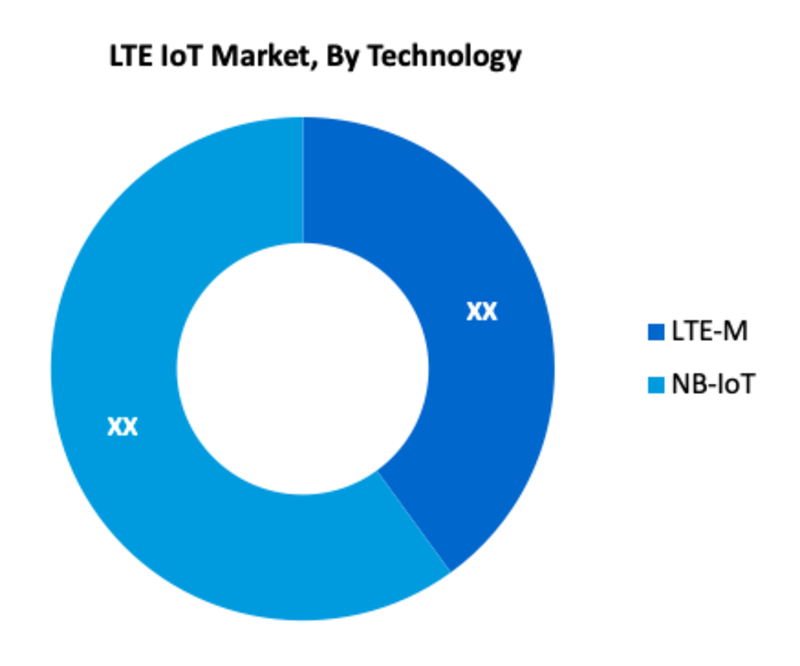 Based on Technology, NB-IoT is one of the major segments in the global LTE IoT market. LTE IoT is made up of two main technologies: LTE-M and NB-IoT. The LTE-M is a technology standard for low power wide area networks. It's unique to LTE CatM1, which was created specifically for IoT. By reducing complexity and expanding coverage, LTE-M aims to minimize modem costs while also supporting data integrity and security. NB-IoT increases the spectrum's capacity and efficiency. The global LTE IoT market is predicted to be driven by the rising demand for essential NB-IoT benefits such as extended range, greater network reliability and security, easy deployment, and cost-effectiveness in the future years.

Region-wise, North America is anticipated to dominate the overall market, throughout the forecast period. IoT and cloud services are increasingly adopted in this area. The Narrowband-IoT market is also benefiting from the growing demand for efficient and low-cost communication technology in the area. Because of the growing use of NB-IoT in the automotive and transportation sectors in the region, the LTE IoT market in Europe is expected to rise steadily. Moreover, the market in the Asia Pacific is expected to grow at considerable rate in the forthcoming years. In Asia-Pacific, the number of government projects for intelligent cities is growing, particularly in India and China. This fact contributes towards the growth of the market in this region.

Q1. What are the driving factors for the global LTE IoT market?

A. The global LTE IoT market is developing because of the growing number of connected devices and the necessity for distinct and well-defined network parameters

Q2. Which Segments are covered in the global LTE IoT market report?

A. Technology, Service, Industry, and Region. these segments are covered in the global LTE IoT market report.

Q3. Which segment is projected to hold the largest share in the global LTE IoT market?

A. NB-IoT segment is projected to hold the largest share in the global LTE IoT market.

Q4. Which region holds the largest share in the global LTE IoT market?

A. North America held the largest share in the global LTE IoT market.

Q5. Which are the prominent players in the global LTE IoT market?