DataLibraryResearch is tracking the market dynamics of the crisis in the Chemical & Material industry amid lock-down changes in the supply chain.

The global Phycocyanin market is expected to grow at a sound pace in the times to follow. Consumers of various ages have been drawn to items such as vivid blue-tinted frosting on a cupcake or an ocean-blue coloured candy. Food additives or food colourants are responsible for the product's blue colour. Phycocyanin is a blue pigment generated from blue-green algae found in the sea that is used as a food colourant. Phycocyanin derived from the sea offers several appealing characteristics that are driving the market growth. With a new wave of natural ingredients and natural products, consumer expectations and perceptions are altering the food and beverage business. Phycocyanin is a blue colourant that is obtained from natural resources and provides natural alternatives to blue colourants on the global market. Over the projection period, phycocyanin is expected to see a jump in demand due to rising market demand for natural ingredients.

The US Food and Drug Administration has approved phycocyanin, a member of the phycobilli protein family, for use in food and beverage products. Food manufacturers are urged to employ phycocyanin instead of synthetic blue colours, which is propelling the phycocyanin market forward. Phycocyanin is known for its brilliant to dark blue colour, but it also has anti-cancer, anti-inflammatory, and antioxidant effects, which has created a health halo around its use. The rising frequency of various diseases around the world, particularly in developed countries, is raising health concerns and awareness, which is expected to drive up market demand for phycocyanin.

A pandemic such as COVID-19 has not only affected the smooth operations of food supply chains but also resulted in food insecurity conditions in several nations. Manufacturers working in the sector are facing challenges in regards to operations, supply chain, training, safety, emergency responses, awareness, incident management, recreating business models, digitalization, and other unanticipated impacts. Alcohol, a major component in the beverage industry is facing a devastating effect of a pandemic. Around 13% to 15% of the craft beer sector in the world is in the process of shutting up shop, and the wine industry is in severe distress. Besides, shortage of raw materials caused to shut down of many small to medium food processing companies around the world 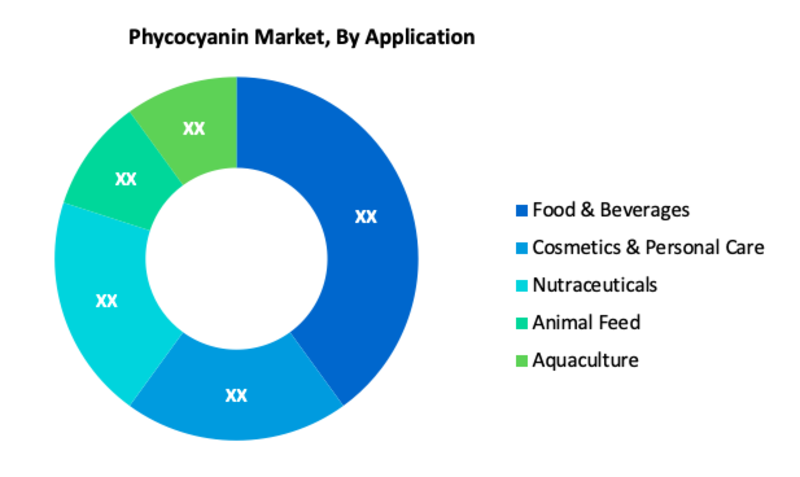 Some key developments and strategies adopted by manufacturers in the Phycocyanin are highlighted below.

·       In August 2019, Scottish biotech company ScotBio has developed a patent-protected method of enhancing the amount of phycocyanin, the blue pigment, produced in spirulina. The company said this innovation will make indoor-grown spirulina a cost-effective option for the food sector.

Q1. What are the driving factors for the Phycocyanin market?

A. The rising frequency of various diseases around the world, particularly in developed countries, is raising health concerns and awareness, which is expected to drive up market demand for phycocyanin.

Q2. Which Segments are covered in the Phycocyanin Market report?

A. Nature, Form, Grade, Application, and Region. these segments are covered in the Phycocyanin market report.

Q3. Which segment is projected to hold the largest share in the Phycocyanin Market?

A. The food & beverages segment is projected to hold the largest share in the Phycocyanin Market.

Q4. Which region holds the largest share in the Phycocyanin market?

A. North America held the largest share in the global Phycocyanin market.

Q5. Which are the prominent players in the Phycocyanin Market?

Phycocyanin Market Overview The global Phycocyanin market is expected to grow at a sound pace in ...